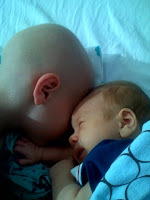 Good Friday morning to everyone. Logan did excellent yesterday. Mom and Dad are so proud of him. It was a long day and we did not get home until 7:30 last night. Logan could not eat all day since he would be under anesthesia. So we stopped and he got a well deserved milkshake and chicken nuggets at McDonald’s.
Yesterday he had the bone scan as well as bone marrow test. Dad went with him into the room where they put him to sleep. He was talking to the doctor asking about the medicine (it looked like milk). The doctor told him it was sleepy cow milk. Logan thought that was funny. They injected it into his Hickman line and within 10 seconds he yawned and was out cold. They kept him under for about three hours. Mom, Dad, Grandma, Grandpa David, & Peyton played cards in the cafeteria….boys vs. girls. It ended in a tie for those competitive ones out there. When Logan was done they brought him back to the room. He continued to sleep for about another 1/2 hour. The nurse then took the tubes etc. off and that started to wake him up. The first smile we got was when we put Peyton by him and Logan snuggled up to him and gave him a kiss. He continued to slowly wake up over the next hour. It was like he was drunk…he would try to talk to Kelly about wanting juice but we could not understand. The good thing is he did not get scared and was VERY brave. By the time we got home he was running around and he helped give Peyton a bath. Logan usually goes to bed about 8:30pm but due to the late nap he was in Mom & Dad’s bedroom waking us up at 10:30pm.
Today, hopefully we will get results of CAT scan & bone scan. Enjoy the picture. This was when Logan was just waking up.
Share