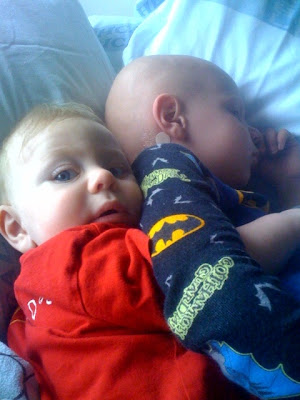 As the saying goes….”one step forward, two steps backward”. Yesterday afternoon just as we started to see a very tiny glimpse of Logan making jokes it all turned worse last night. Logan’s temperature went to 104 degrees and his blood pressure dropped. I was awoken at one point and there were 5 nurses in the room hovering over Logan. They are worried fluids in his body are exiting into tissue and lungs and not going through bloodstream and out as pee/poop. They gave him a blood transfusion early this morning and that helps with keeping fluids in the right place. When the doctors checked him out they were satisfied w/ his color as well as his lung sounds but just want to keep a close eye on him. Also his oxygen intake is a little low. Perfect is 100% but since Logan is in pain he is breathing a little shallow and this has caused his oxygen to drop to low 90’s. They now have oxygen over him that continuously is in Logan’s environment. Since they introduced this his oxygen has risen to about 96-97…this is great.
Currently as I am typing this Logan, Mom, & Peyton are on my bed. Peyton keeps cuddling up to Logan. It is the only time we get smiles from Logan….He is an awesome big brother. This picture above was taken just minutes ago. You can see Logan’s cheeks/mouth are very swollen. This is common w/ the infections in his mouth.
Thank you for your continued support and prayers…everyone start praying for Logan’s counts to come up and start kicking butt on the infection!
Share