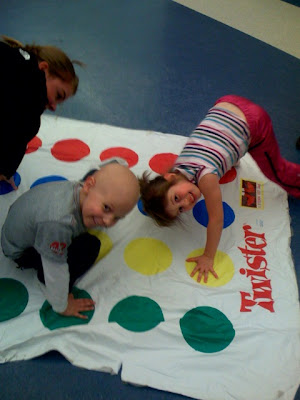 Sorry we missed yesterday. Aunt Kristi came up to visit from Oregon and she is staying with us (or as Logan calls her Aunt Krixti). He is so excited she is here. He was in my bed yesterday morning at 7am when is Krixti going to be here and kept asking about every five minutes until she arrived at 3pm.
Friday was an amazing day as you can see by the comments. Our neighbor Mario Casello is the principal at a local Junior High in Puyallup (Kalles Jr. High). There is about 900+ students there. He and his family (Wendy, Chloe, & Kennedy) have been amazing! Mario organized an event at his school for Logan….Hat Day (kids cannot wear hats to school usually). Anyone that wanted to wear a hat paid $1.00. Mario said kids were coming up and giving much more. One kid brought his bank and gave $36.00 another gave a $100.00 bill….wow!
Then that afternoon Mario had an assembly at the school just before the kids were going to go home. He explained to the student body who Logan was and what Neuroblastoma was. He told them how his daughter Chloe dedicated her 5th birthday to Logan. Faculty came up to me and said they have never heard the gym so quiet. A lot of the kids were moved by Logan’s story. Mario then had Logan & Chloe come out hand in hand so the students could meet them. It was awesome. Mr. Casello then shaved his head in front of everyone so he could be bald like Logan. He let Logan start the shaving and Logan thought that was awesome. After the assembly the school bell rang and kids headed home. A lot of them came down and shook Logan’s hand, high fived him, took pictures with him with their cell phones. One kid reached into his pocket and pulled out $8.00 wrinkled dollars and gave it to me. It was really amazing.
That night at the school like they do all Friday’s Mr. Casello and staff/volunteers open the Gym to students to play sports, watch movies, play games etc. Each student pays $5.00 to attend. All proceeds that night went to Logan! Logan and I attended for about an hour and Logan had a blast as you can see by the picture of him and Chloe playing twister together. Mr. Casello said that was the biggest turnout they have ever had! Kids also were shaving their heads for Logan. The Kalles Girls basketball team made Logan a big card and donated some money to him.
THANK YOU KALLES TYEES! TYEE PRIDE IS AMAZING AND YOU HAVE MADE AN IMPACT ON A LITTLE BOYS LIFE (AND HIS PARENTS) FOREVER!
Share