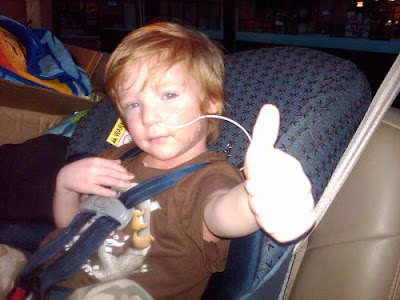 Merry Christmas Eve to all. Yesterday Logan, Peyton, & I had the fortune to meet an amazing family at Seattle Children’s Hospital. There son, John, is battling Neuroblastoma, his mom just gave birth…..sound familiar?
John’s Mom heard of Logan through the King 5 story Chris Egan did. She is not that big of a sports fan and was just flipping through channels on Wednesday night. Chris happened to be re-playing the story that night as one of the positive ones of 2010. John’s mom caught the end of the story, found me through Facebook & contacted me. I was so touched/moved by their story.
I told Logan how his story of surviving and bravery has inspired this family. A huge smile came to his face. When I told him that John would be at the hospital for Christmas he was worried that John would not get presents. I reassured him that Santa delivers everywhere. Logan & I also came up with the idea to drop a surprise off for him. We went to Toys r Us and picked up some small gifts and delivered them. As we know any small distraction from the long road to fighting this disease really helps.
This holiday season & beyond please put the Hartle family in your prayers.
Click here to send them some kind words please…
Share