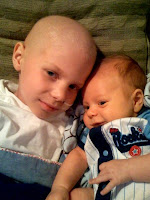 Logan had a good morning today. Mom & him went to hospital to get blood work done (uncle Pat watched Peyton). Logan’s counts are all up. While at the hospital though he did get sick. They gave him some medicine that made him very tired. He fell asleep at 12:30pm and woke up at 6pm. While driving home w/ Logan Kelly did have a scare. She looked back and just saw the whites of Logan’s eyes. She screamed his name and shook his leg but he would not wake up. She pulled off the freeway and shook him. He then woke up. He was in a very deep sleep. He then was very angry she woke him up. Tonight he is watching cartoons. He has been drinking apple juice and ate some chips. He is very, very weak. As I finishing typing this though he is playing in the bathtub w/ some toys! God we love him so much!